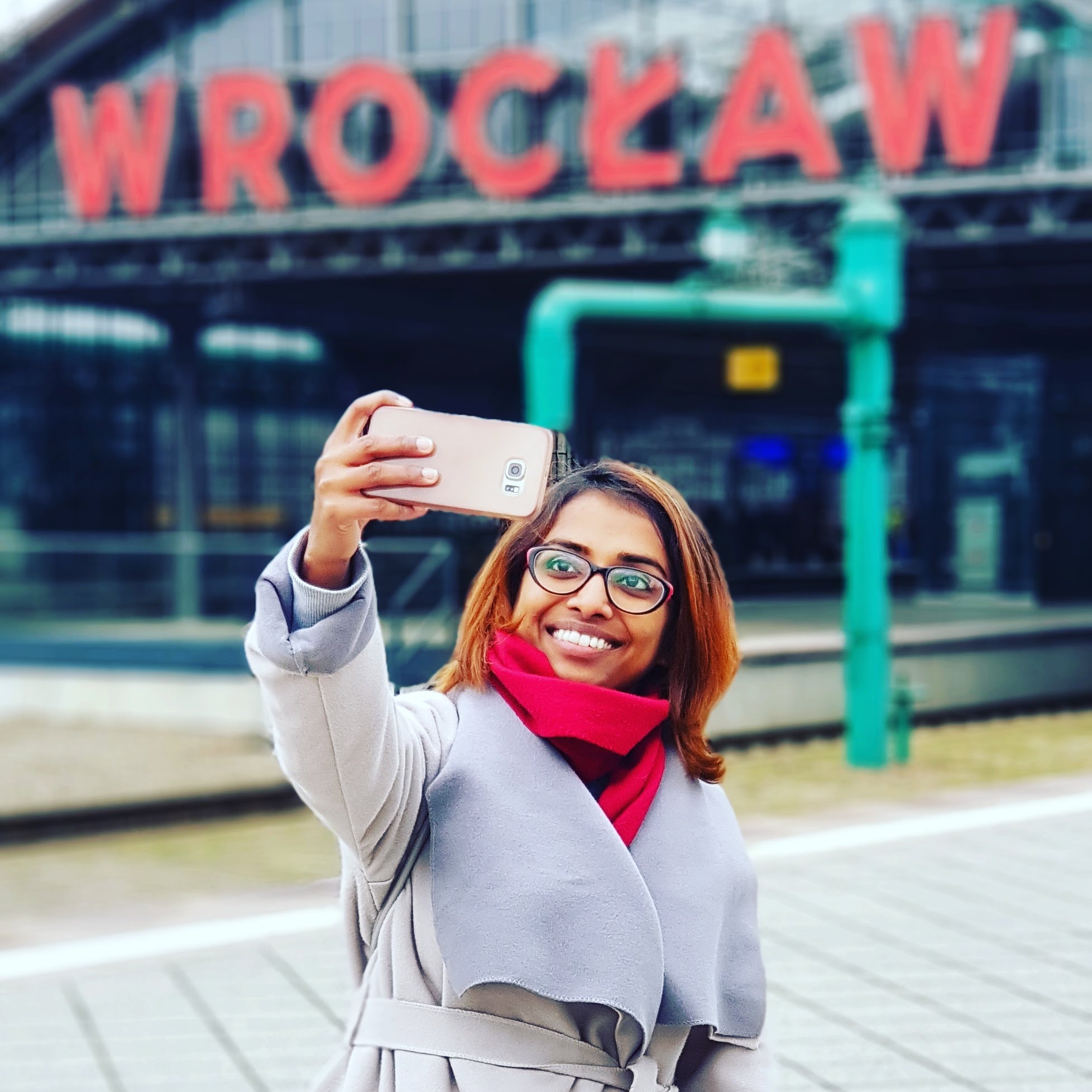 Wrocław (vrots-wahf), is about a three hours bus ride from Krakow. We started at 5 am to catch the bus at 6 am from Dworzec Głowny, which is the main bus/train station in Krakow. The journey was comfortable and one thing I appreciate from the bus service provider is that nowadays they have the option to choose your seat while making the booking. Four years ago, people were literally pushing and shoving each other to get a seat, even though you had a ticket. Thank goodness for the change! 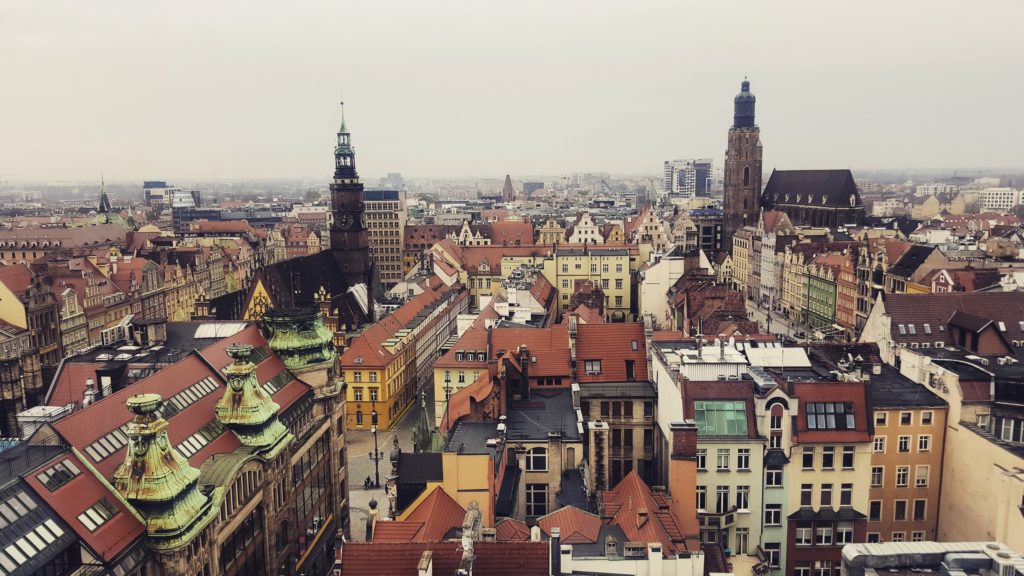 At Wrocław, the bus terminal for tourist buses is located in the basement level of the new shopping mall Wrocławia, which is close to the PKP Train Station of Dworzec Wrocław. Our hotel was a short 20-minute walk from the bus station and a 3-minute walk to the city centre. One thing that Wrocław is known for apart from its historic buildings is the Dwarves or Krasnal in Polish. These cute tiny figurines can be spotted all over Wrocław and is a must see. I saw my first Dwarf coming right out of the mall, then next walking down the main street to the city centre. Once you find one, then you get hooked and want to find more. You can read all about these Dwarves and how they came about via the internet. However, I would like to point out that for those who are enthusiastic to find them all, you can use the online app called Wrocław Dwarfs or Go Wrocław Dwarfs. There are many others but I managed to download Go Wrocław Dwarfs. To be honest I did not use it that much as it was not an interactive map, that showed you if you were close to any Dwarf. But once you’re in the city centre, then it’s hard not miss them.

We stayed at a hotel right in the heart of the city centre and just walked everywhere. As it was my first time in this city, I did not plan to overdue with the sightseeing. My boyfriend and I decided to only walk around and stay close to the market square(Rynek) area. We walked around the whole of the city centre, finding Dwarfs as we went and also admiring the beauty of the place. This way we covered a lot of ground and the weather was very favourable. Old Town houses line the main square, the beautiful Town Hall with its astronomical clock sits right in the middle of the main square.

The first place we went was up to the St. Mary Magdalene’s Church (Kościół Św. Marii Magdaleny). This Gothic church boasts of its unique Penitent Bridge (Mostek Pokutnic), an open-air bridge 46m above ground! The church was built in the 13th Century and is still beautifully preserved. There are many legends which surround the bridge, but there was one legend which you can find inside the church. The story goes there was once a fair maiden who was young and carefree. She did not listen to her parents to learn to do house chores but instead chose to go out to party and stay out late and seduce men. One day as punishment a Witch took this maiden up to the bridge of the tower and made her sweep it and that is where she stayed all her life. Stuck high up on the tower. The bridge is that is why also known as “Mostek Czarownic” (Witches’ Bridge).

Did you know that Wrocław has around twelve tiny islands on the river Oder or that Wrocław is known as the Venice of Poland? The most visited islands are the Piaskowa, Tamka Island, Wyspy Młynska, Wyspa Bielarska and the biggest of them all, Ostrow Tumski. We managed to walk on all of them, but the Cathedral at the heart of Ostrow Tumski left me in awe. It was on this island that the first settlers of Wrocław built the first settlement, way back in 9th Century. The name Ostrow Tumski means Cathedral Island and was one of the first sites in Poland, back in 1000 A.D, when King Bolesław-The Brave, chose to build a Cathedral. A must-see if you go to Wrocław.

A short walk away from the city centre is the Hala Targowa or Market Hall. This majestic structure built between 1906-08 and houses a variety of vendor’s who sell everything from fruits, vegetables and meat products, to household knick-knacks. It is basically a Farmer’s Market with fresh produce. It is open daily from 8 am to 18:30 pm and is a place you must visit, as it is also one of the most popular tourist attractions.

Other points of interest that we saw was the Museum of Natural History. I had seen pictures of it before especially there is one when you just google the name of the museum. The building is covered with Boston Ivy and it is so pretty during Autumn as the leaves change colour. Close by is the Racławice Panorama, which is s a monumental cycloramic painting(15 m × 114 m (49 ft × 374 ft) depicting the Battle of Racławice, during the Kościuszko Uprising. Unfortunately, we were not able to see the painting as there was a ticketing system which allowed you to book viewing of the painting at certain time slots. The only open times were later in the afternoon and we had made other plans already. Instead, we walked down the boulevard of the river Odra and saw some other sights and parks.

All in all, I had a great time in Wrocław and do plan to go back again. As I said before, the city is very beautiful and there is so much more which I feel I need to see here. I especially would like to go back and see the Christmas Markets as the pictures on the internet just seem surreal.

For now, I am really glad we made this trip as it was long overdue. Seeing the tiny Dwarves was icing on the cake. We did not see all the Dwarves but managed to see a whole bunch of them and you can see them all below.