Two days in Pudhucherry and an Elephant 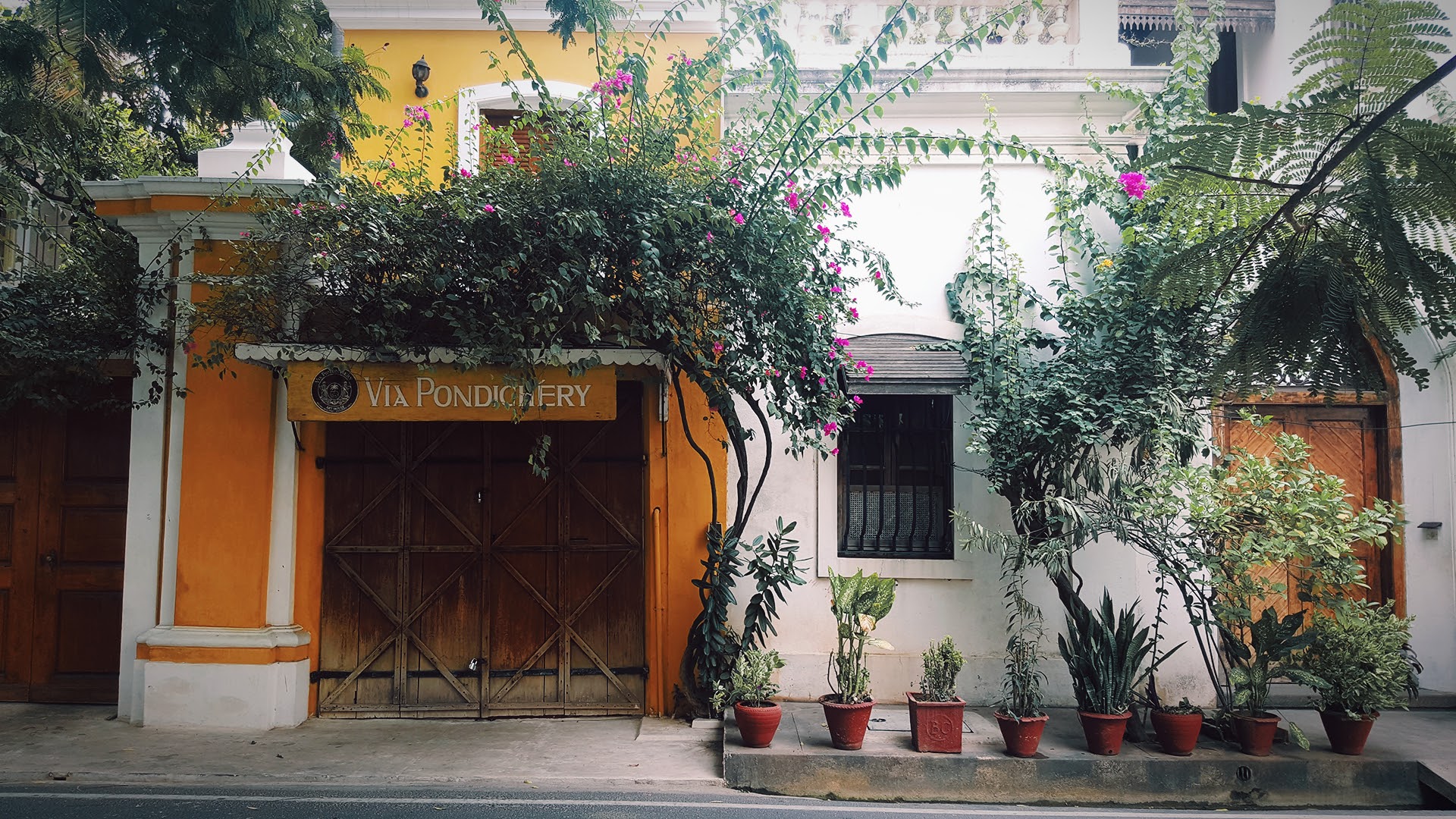 Although its officially Autumn, I still feel like Summer, especially when the sun is out! For those of you who live in Krakow or Poland in general, know that the weather keeps changing from day to day and now we are seeing a lot of cold rainy days with peeks of sunshine every now and again. But I for once have decided; that I will not let this bring down my spirits and I am going to just embrace the weather. Complaining about the weather will not change it, so I better be grateful for it.

Ever since I returned from my trip to India, I have been planning to pen down my adventures and share with you the highlights of my time spent there. For many people in Europe and around the world travelling to India is a dream, a journey, an adventure and surprisingly enough it is for me too. Every time I fly back home I feel happy and excited to not only see my family but also to enjoy the sights and sounds of a place I once called home.

As some of you know I am from Mangalore and also lived and worked in Bangalore for many years before moving to Krakow. I was offered to go to Chennai for a business trip as part of training in July and August and I had only ever once been to Chennai once before, for the IPL finals (Indian Premier League) and also once on a weekend trip to Puducherry(formerly known as Pondicherry), but that was years ago.

I landed in Chennai first week of July and that upcoming weekend my Polish colleagues asked me to go with them to Puducherry. I was hesitant, but then I thought it is a good chance to go back after all these years. Puducherry is quite the tourist hot spot with its famous former French Colony. This was not just any old sightseeing trip, as I was given the task to find an elephant which one of my colleagues had on her bucket list.

Making the decision to go there was one thing, the next thing I knew I was in charge of arranging the stay and mode of transport. Since we were staying at a 5-star hotel in Chennai, we had 5-star recommendations from the concierge’s desk! So we decided to scour the net for some affordable offers. It did not take long as I found a nice hotel via Booking.com and bus tickets on Redbus.in. Tickets were booked late Thursday evening for a Saturday morning journey.

Travelling to Puducherry from Chennai one can find many options. Buses (local Volvo) are aplenty.  You can drive down or take a flight from Chennai Airport as well. We booked an air-conditioned semi sleeper onwards and a sleeper for the return. It took us about 3.5 hours to reach Puducherry from Chennai and I must admit in spite of not speaking a word of Tamil; it was rather easy getting there and to our amazement, the bus dropped us off right in front of our hotel 🙂

We reached at around 8:30 am and at first, were told at the reception desk that we could not check in till about 11 am.  There was another guest who informed us to wait half an hour and we would be allowed to do an early check-in at 9 am. We already had our breakfast at the hotel in Chennai had packed for us early breakfast boxes which included fruit and some goodies from their bakery. This kept us satiated till about lunchtime. 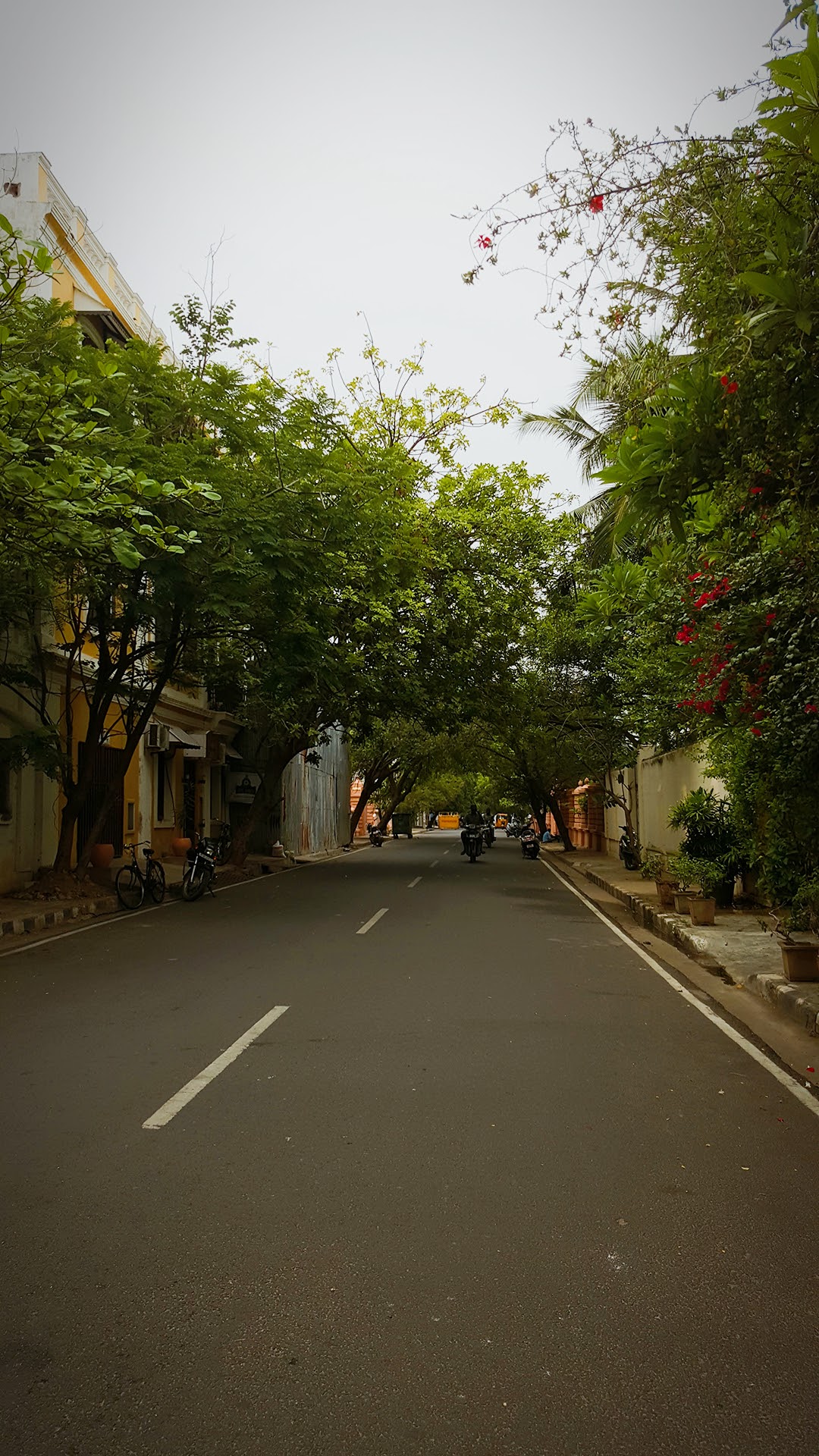 Sights and sounds a French Affair!

After freshening up we took a rickshaw down to Goubert Ave (Beach Rd) a.k.a The Seafront or Seaside Promenade. The once beautiful sandy beaches are now replaced with an artificial beach and protected by huge boulders that help to prevent further erosion of the seafront. There is so much to see here and you can see it all just on foot.

The French Quarter has a grid layout with perpendicular roads and is divided into Ville Blanche / White Town, which lies on one side of the canal that separates the town from the Indian Quarter (Ville Noire / Black Town). There are primarily four streets in the French Quarter of Pondicherry: RUE DUMAS, RUE ROMAIN ROLLAND, RUE SUFFREN and RUE LA BOURDONNAIS. The best way to soak in the French culture here is to explore these streets on foot which we did! The colonial-style French villas have huge compounds, grand walls and majestic doors which defines the French lifestyle of keeping their personal and social life to themselves behind these high walls.  The villas are all coloured in primarily sunburnt yellow, white and peach.

We arrived here around 10 am by rickshaw (a.k.a tuk-tuk) and walked around for a while. The landmarks here include the statue of Mahatma Gandhi, French War Memorial, a statue of Dupleix, Le Cafe, Park Monument (Aayi Mandapam), Kargil War Memorial, Pondicherry Museum, Ambedkar Manimandapam etc. Adjacent to the beachfront is the streets that lead to the former French Colony. We easily spent about two hours walking around and also saw The French Consulate, Eglise de Notre Dame de la Conception Immaculee, Eglise de Notre Dame des Anges, The Pondicherry Police Headquarters, some local shops like Anoukhi (where one can buy Indian ethnic wear which is usually handmade and block printed by local artisans)

We walked to the Arulmigu Manakula Vinayagar Temple, but when we arrived around noon time we were told that the resident elephant visits only at 4 pm. So with time to kill we just went back to The Promenade Hotel for a nice Indo French lunch. Afterwards, we just wandered around White Town for a while and ended up in a local antique store which was a treasure house of antiques from all over India like huge wood columns, statues of Hindu God’s and Goddesses and other deities, that easily dates back a hundred years. As we walked past the walls of this town, it felt as though we were not in India anymore. The beautiful houses and architecture are just so captivating and the bright yellow walls and houses are postcard-worthy.

We visited the Aurobindo Ashram which was luckily open in spite of a bandh(strike). The Ashram is located to the Eastern part of Puducherry. Ashramites live and work buildings spread throughout the area. The focus of community life is in the Ashram main building.

At 3:30 pm we went on back to the temple and waited in hope to see Laxmi the Elephant! It was pretty quiet now at the temple as people and vendors had either gone home or were resting somewhere close by. But around 4 pm a crowd was gathering. Then suddenly Laxmi the Elephant came down the streets and walked past me. I patted her on the back, a moment I will remember forever! Elephants are a majestic creature, yet they are so loving. Laxmi seemed happy with the crowd. She whizzed past us all and went straight inside the temple and visited the different deities. On a side note, she also managed to make a big poop which was quickly cleaned off.

The temple is a must-see with or without Laxmi, as the interior walls are decorated with ornate carvings of different versions of the Hindu God Ganesh. The murals and paintings on the walls of the Hindu God’s is a fascinating work of Art!

Later on, she went back out and was giving her blessings to everyone who handed her some money. It’s kind of sad to see that this is her life now, but we could see that she is really well taken care of and felt loved being in contact with all the visitors. My colleague was really happy that she finally got to tick this moment off her bucket list and I am glad I took her to this temple. After this, we went back to the hotel and just chilled for a couple of hours and then headed out for dinner to Umami Kitchen which serves up Italian and Pan Asian cuisine. The resto-bar has a nice relaxed ambience and the rooftop atmosphere was just what we needed after a long day.

Auroville the City of Dawn!

The next day we had planned to check out of the hotel post breakfast and go over to Auroville, but things did not work out as planned. Immediately after breakfast, I got a message that our return bus to Chennai, that evening was cancelled due to some unforeseen reason. We tried to search alternate buses back to Chennai but by then most buses were already fully booked. After seeking advice from my sister we were able to book an Ola cab to drive back to Chennai and took the opportunity to stop by at the infamous Auroville.

It’s hard to describe Auroville as I had never been to such a place before. I am not sure if I can call it Utopia. Auroville is described as an experimental township located in the Viluppuram district of Puducherry. According to the website, the purpose of Auroville is to realise human unity! Located in the middle of the township is the Matrimandir, which is seen as “a symbol of the Divine’s answer to man’s aspiration for perfection”. Silence is maintained inside the Matrimandir and the entire area surrounding the Matrimandir is called the Peace area. Inside the Matrimandir, there is a spiralling ramp that leads upwards to an air-conditioned chamber. We did not go inside the Mantrimandir but just got a ticket to walk up to the viewing point at the peace area, surrounding the Mandir.

After this, we drove back to Chennai and we were back at our hotel by 4 pm and went straight poolside to enjoy a nice relaxing dip in the pool. More on our stay at the ITC Grand Chola, Chennai on my upcoming blog posts. Stay tuned 🙂