How is it going? Before I get on with the blog post I would like to give a HUGE shoutout to my tribe for following my content and also for all your wonderful support. Indian Girl In Poland has made it to the Top 20 Best Poland Blogs on the planet by Feedspot Blog Reader. This is only my second award after Top 100 European Fashion Blog also by Feedspot Blog Reader.   How cool! I cannot thank you enough :*

On a personal level, I am pretty much busy at work these days, trying to nurse an injured wrist (I fell, don’t ask, long story) and I have also signed up for proper Polish classes summer semester, as I have decided that it is about time I learn the language of the country I now call home. Fingers crossed I should be fluent in Polish in no time.

As many of you know central Europe and especially Poland were once home to the monarchy. So it comes as no surprise that there are still quite a lot of Castles some fully intact and yet others in ruins dotted all across the country. Krakow’s very own Royal Wawel Castle is a very popular tourist attraction and is visited by hundreds of visitors per day all year round.

Zamek Ogrodzieniec (pronounced Ogrod-ji-en-ieths) is a beautiful castle that is in a semi-ruinous state and is open to the public for visits, just a short hours drive from Krakow. It is ideal for a day trip with the family. It is located in the semi-mountainous highland region called the Polish Jura.

The Castle of Ogrodzieniec deserves special attention, as it has a very rich and interesting history. There are also many legends associated with this place. It is the largest and most famous castle building in Silesia and the most popular of all the castles on the Trail of the Eagles’ Nests. I visited the Castle a while ago and thought it would be a great discovery to share with my readers. I hope you are inspired to go check it out yourselves.

Once you arrive there (by car) one must purchase an entry ticket. At this point, you will have the option to buy a ticket just to visit the Castle or buy a shared ticket to walk over to GRÓD NA GÓRZE BIRÓW which is a replica of an “old” village a short walk away. The lands surrounding the Castle are brimming with a few theme park activities, especially for kids. There is a zip-line park and also rock climbing activities nearby plus a few dozen other attractions. Hence I think this is a perfect spot for a day trip for the entire family, even your pet dog!

The Castle of Ogrodzieniec is very well preserved from the 14th Century. Of course, the exteriors are now just brick and mortar, but once upon a time, it was one of the most beautiful Castles in the entire Eagle Nests Trail. Built-in the XIV-XV century by the Włodków Sulimczyków family. It is believed to have had, huge glass stained windows, a library with a very good collection of books and interiors that rivaled that of Krakow’s Royal Wawel Castle.

I tried to find some material about it but it is all mostly in the Polish language. The castle was built in about the 12th century, during the reign of Bolesław III Wrymouth and the first stronghold here was completely destroyed by the Tatars in the year 1241. In the middle of the 14th century, a new gothic castle was built on the same spot by the Włodek Sulima family. Three high rocks surround the castle. The defensive walls were built to close the open area between the three rocks and a narrow opening between two of the rocks served as an entrance. Over the years due to many invasions the castle was left in ruins.

The Castle consisted of a few wings. The oldest part is the Eastern Tower, which functioned as a bastion after is reconstruction. The middle parts of the Castle are also one of the oldest parts and include the Knight’s chambers, the gunpowder magazine, a treasure house, and the lower parts of the Beluard Bastion situated in the south. The North wing, magnificent chambers built over the middle part of the Castle e.g The “Kredencerska” Chambers and three towers fulfilled the representative function. The Southern parts are chronologically the youngest parts “Kurza Stopa”, the prison in the lowest parts, the Marble Chamber, and the Curtain Wall, which joins the two Southern wings. The Castle also had a carriage house, a forge, a brewery and a distillery.

After the Second World War, the castle was nationalized and the work to preserve the ruins and open them to visitors was started in 1949 and was finished in 1973.

The castle is now open to visitors, almost every part of it! In the courtyard, interesting events are organized throughout the season, attracting tourists, knights and white-collar visitors. One of the most popular is the Knight’s Tournament organized every year with the participation of knights brotherhoods.

Since 2010, in Podzamcze, just below the ruins of the castle, a great attraction for the whole family was opened to the public – Park Miniatur Ogrodzieniec, where you can see miniatures of reconstructed castles from the entire Jura area. For the youngest visitor, there is a big air castle and a playground. In 2014, the Park has expanded considerably and also includes: Amusement Park, Physical Experience Park, Legend and Fear House, and Sledge riding.

After taking a tour of the Castle, which lasts about 2 hours, you can dine at one of the many food stalls that line the trail leading up to the Castle. 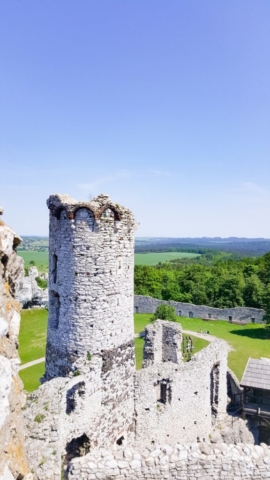 The Birów Stronghold is supposed to depict what a stronghold of the first kings from the Piast Dynasty might have looked like.

Wood was the main building material use yet stones and soil were also used. Embankment and stockades protected the inhabitants from enemies. Steep hills, rocks, or precipitous slopes stood as natural wards for the stronghold.

The last fortified stronghold on the Birów Mountain was built probably in the 13th century and it was when the Polish state was divided into provinces. Between the 13th and 15th centuries, the kingdom began to slowly integrate again. The square area within the wooden walls is called majdan (courtyard). Here’s where the daily life of the inhabitants took place.

When this wooden stronghold was at the peak of its glory, the courtyard within was bursting with life. There were merely a few warriors here during the 13th and 14th Centuries. There were also servants, merchants, and other inhabitants. The courtyards were full of animals like horses, pigs, hens, etc. Only a few soldiers were on the lookout for danger at any given point in time. The rest of them were busy repairing their weapons, rushing to the local blacksmith, or chasing after fair maidens.

1984: Heavy Metal band Iron Maiden recorded a movie insert inside the Castle, which was used in the video Live After Death in the Behind The Iron Curtain Album. The material was used for the ‘Hallowed Be Thy Name’ song.

Hope you enjoyed reading this post and thanks for stopping by.

14 thoughts on “Medieval Castle Ruins Perfect For A Day Trip”